The 2016 Fiscal Year Report on VA Loans in Hawaii & Nationally 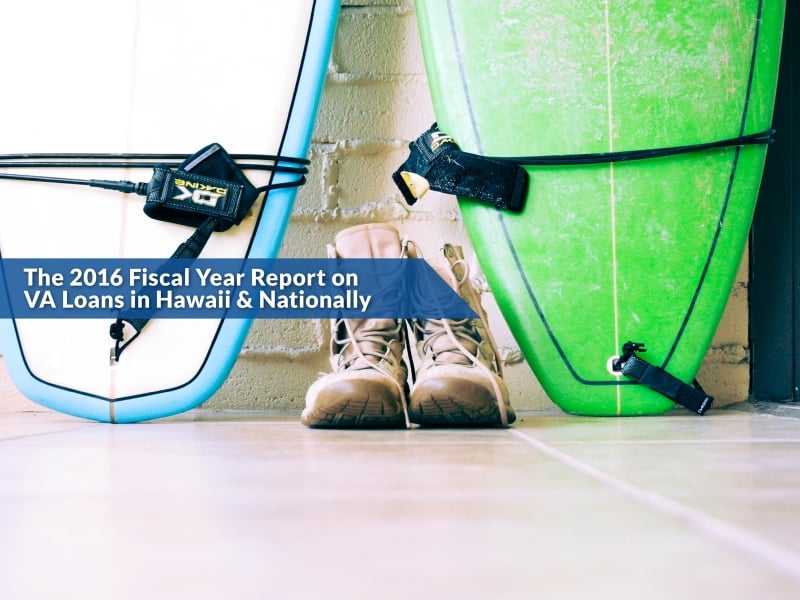 The top three age brackets for most VA loans guaranteed were:

In 2016, VA loan purchase and refinance loans continued to rise in Hawaii:

“One of the main reasons we’ve seen a growth in VA purchases, particularly in Hawaii, is the typical hurdles towards homeownership are removed if you’re VA eligible. For instance, a VA eligible buyer doesn’t need a whole lot of money in the bank in order to close on a property.

In 2016, our Hawaii VA Loans’ home buyers who chose not to put a down payment, only came in with an average of $2,200 at closing to get their keys. That’s less money upfront than what it would typically cost them to rent a home with first month’s rent and a security deposit. That’s significant savings.”

The design and incentives of the VA home loan program are a credit to its success, because….

Additionally, low default rates are a testament to the intelligent way the program is designed and the nature of the veteran community.

“Global financial concerns and issues like the Brexit vote kept interest rates low once again and brought some significant variation in rates. When rates dropped, a lot of people with existing VA loans were able to use the IRRRL program to quickly and easily refinance to save money each month.

2017 has started with higher rates than we saw in 2016, if the economy continues to improve, expect that trend to continue. The rates will likely slow the refinance volume, but they are still low enough to keep home affordability near the historic levels we’ve seen over the past several years. As the popularity of the VA loan program grows, I expect to see another record year of VA purchase transactions.”

Hawaii VA Loans has been a local VA loan lender since 2007 with the mission to simplify the VA loan process for the military and veteran community. Our VA Loan Specialists and team members are driven to play a part in the increase of veteran homeownership in Hawaii and educate VA home buyers about their hard-earned benefits while serving their country. Furthermore, we are committed to seeing the trend continue in 2017.

To find out how you can qualify for a VA loan, contact us at 808-792-4251 or simply fill out the secured online loan application and a member of our team will contact you directly.

Why VA Loans Are on the Rise in Hawaii