oa Where are Interest Rates Headed? 4%, 8%, or Somewhere in Between? |Hawaii VA Loans | VA Home Buying Made Easy
Get Started
July 1st, 2009

Where are Interest Rates Headed? 4%, 8%, or Somewhere in Between? 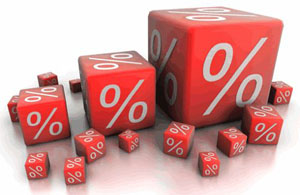 We have recently completed a three week stint where rates increased almost every day.  They have stabilized in the past week and even rebounded slightly, but that recent scare has everyone guessing where rates are headed next.  If you are anything like me, you have been hearing every possible scenario lately.  Of course, no one really knows what the real answer is, but we can do our best to analyze the reasons that each extreme could happen and hopefully define a reasonable expectation.

Let’s look at the rumor that we are all hoping for…will rates go down to 4.00%?  Unfortunately, I don’t think there’s much chance of that happening.  What brought the rates down to the low 4% range several months ago was the announcement and beginning of the Fed’s program of buying mortgages packaged by Fannie Mae and Freddie Mac (the majority of mortgages originated in the U.S.).  They are now about halfway through that program now and there isn’t much room for them to increase the amount of buying they can do.  Last week they announced that they will not be expanding that program.  They can no longer reduce the short term borrowing rates which are already at zero percent.

At today’s rates, the fed remains the largest purchaser of mortgage securities, which means that private investors are not getting the returns they need to balance the perceived risks.  As long as that is the case, the only way rates can go much lower is if the fed increases their buying power.  To do that, they would have to sell even more Treasuries bills than they already are.  Selling more treasuries means more supply and thus lower prices.  Lower Treasury prices means higher Treasury rates and because mortgage rates are always higher in rate than treasury securities (mortgages are more risky), then that would mean higher mortgage rates.  The market had found a balancing point and there simply isn’t enough government cash in the arsenal to buy enough mortgages to drive rates lower.

So…does that mean rates are going to go higher?  Way higher, up to 8%?  Not necessarily in the short term (the next 6-9 months), and I don’t feel comfortable speculating beyond that.  There are two major reasons that could cause interest rates to increase that substantially, inflation or decreased credit quality, and I don’t think either is likely in the near term.  Despite some recent positive economic news which led to a run up in the stock market, the evidence points to a potential stabilization, but we are not yet in a significant recovery.  Without a significant recovery, inflation is not a near-term concern.  In fact, the Fed said on Wednesday, “Substantial resource slack is likely to dampen cost pressures, and the Committee expects that inflation will remain subdued for some time.”

The other situation that could cause a significant upswing in rates is a decrease in credit quality.  This is precisely what caused the subprime meltdown and deterioration of the mortgage market about two years ago.  However, what is left are loans guaranteed by Fannie Mae, Freddie Mac, HUD and the VA.  All of these are government agencies or quasi-governmental agencies owned and implicitly guaranteed by the federal government.  Despite bad conditions and high foreclosure rates in the housing market, buyers of these mortgage securities issued by these entities are insulated by the guarantees.

What’s left?  Well, since there doesn’t seem to be anything within expectations that could push rates significantly up or down, we should probably remain in the same interest rate range for the next several months.  What will affect rates is the economic reports that come out daily and the future expectations those create.  Consistent news of growth, expansion and profits will shift money out of bonds and into the stock market, which will increase mortgage rates slightly.  Bad news about the economy will help keep rates in the lower end of the range.   Bad news abroad and strengthening of the dollar could help rates, but since the fed is the biggest buyer of mortgages right now and they aren’t going to increase that buying, there is probably more chance rates will drift higher than there is that they will drift downward.<–>

The Importance of Interest Rates in VA Loans

Which Rates are Better: Conforming or Government (VA & FHA)?