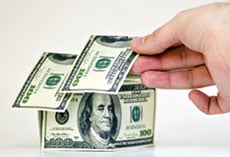 I remember when having above a 700 Fico (credit) score was superb. If you had a 720, you were in elite status and able to get the best loan rates around. Fast forward to 2008 – and a 720 Fico score no longer guarantees a borrower the lowest mortgage rates.

Here’s how this all started. In December 2007, Fannie Mae (FNMA) & Freddie Mac (FHLMC) (the two government sponsored agencies in charge of buying and selling mortgages on the secondary market which helps replenish the supply of capital in the mortgage market) implemented new Loan Level Price Adjustments based on credit score & loan-to-value.

Translation: FNMA & FHLMC implemented a tiered price adjustment matrix which increased closing costs for borrowers with lower credit scores and lower down payment. Why did they do this? To compensate for the losses FNMA & FHLMC were taking on the secondary market due to the increased amount of defaults and foreclosures occurring in the real estate market.

Initially, these Loan Level Price Adjustments or LLPA’s only affected borrowers who had less than a 680 credit score – but a few months later, FNMA & FHLMC increased their matrix to include everyone who had a 719 credit score or lower.

Now starting October 1st, 2008 – FNMA (FHLMC is expected to follow) LLPA matrix will now include those with Fico scores 739 or lower….you see where this is going. 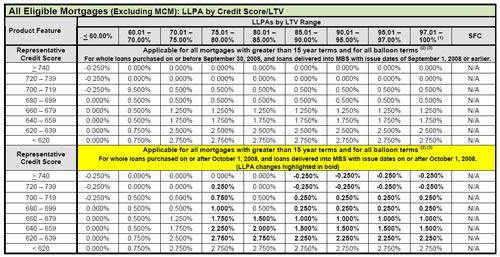 How This Affects You

What does this mean to you if you are in the market to buy a home? Here are scenarios based on three home buyers shopping for a $500K home loan:

Mark, Mindy & Janet all shop around and find out that they can get a fixed 30 year mortgage at 6.000%.  Even though Mark & Mindy have a 20% down payment, because they are getting a conventional loan, they will both have to pay additional closing costs because both of their credit scores are below 739.

Janet with her VA Loan

Even though Janet does not have a down payment and her credit score is considerably lower than Mark & Mindy – Janet will pay less for her loan because she is VA eligible.  Since VA loans can be sold to Ginnie Mae instead of FNMA & FHLMC and currently & Ginnie Mae does not implement a LLPA based on credit score and price adjustment, Janet will not have to pay additional closing costs like Mark & Mindy.

Just another reason why VA loans stand out as the best home loan option for those who are eligible.

Top 4 Ways To Use a Seller Credit